An historic tour to discover the origins of Berlin

Have you ever wondered how old Berlin is and where exactly it was founded? After taking this tour, you have enjoyed a wonderful walk and will have a better understanding of the origins of Berlin.

In 2014 I joined a tour that showed some historic highlights of Berlin Mitte. After giving the tour a few times myself I decided to investigate a bit more and write it down here. 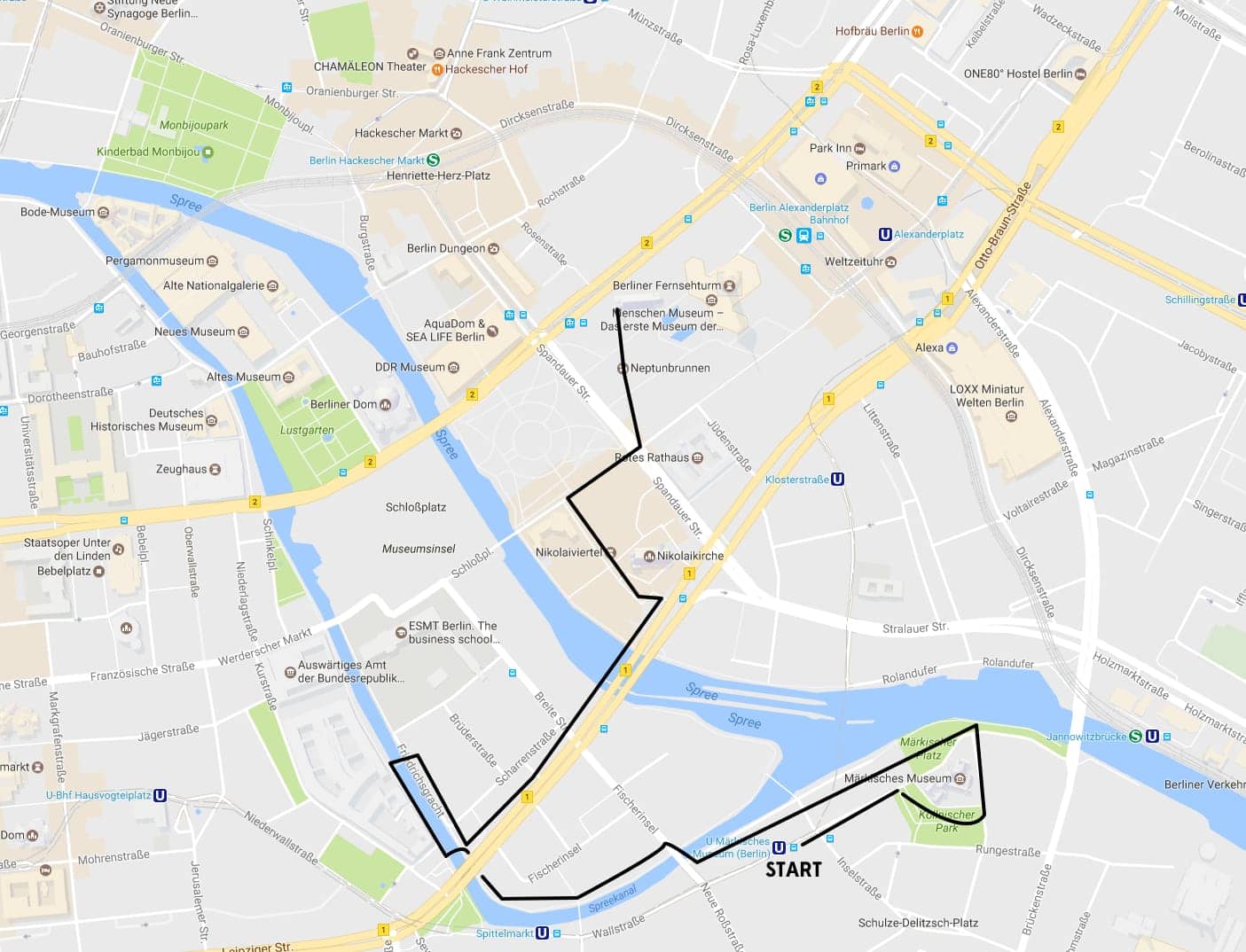 During the tour you will see Kölnischer Park, the Bärenzwinger, the Wusterhauserer Bär, the Märkisches Museum, the Roland, the Jungfernbrücke, Petriplatz, the Mühlendammbrücke, the Nikolaiviertel, the Neptunbrunnen and the Marienkirche, all historic places, most of them dating back to the thirteenth century.

The tour starts at U-Bahnhof Märkisches Museum. In the station you find this mosaic:

It is a map of Berlin and Cölln which were twin towns and altough the city is now known as Berlin, the name Cölln lives on through one of the borough names: Neukölln. The mosaic shows Berlins three oldest churches: Petrikirche, Nikolaikirche and Marienkirche.

The next image shows you a town map from 1688, mapped on the current city map. Notice how the S-bahn between Hackesher Markt and Alexanderplatz runs over the old northern city wall: 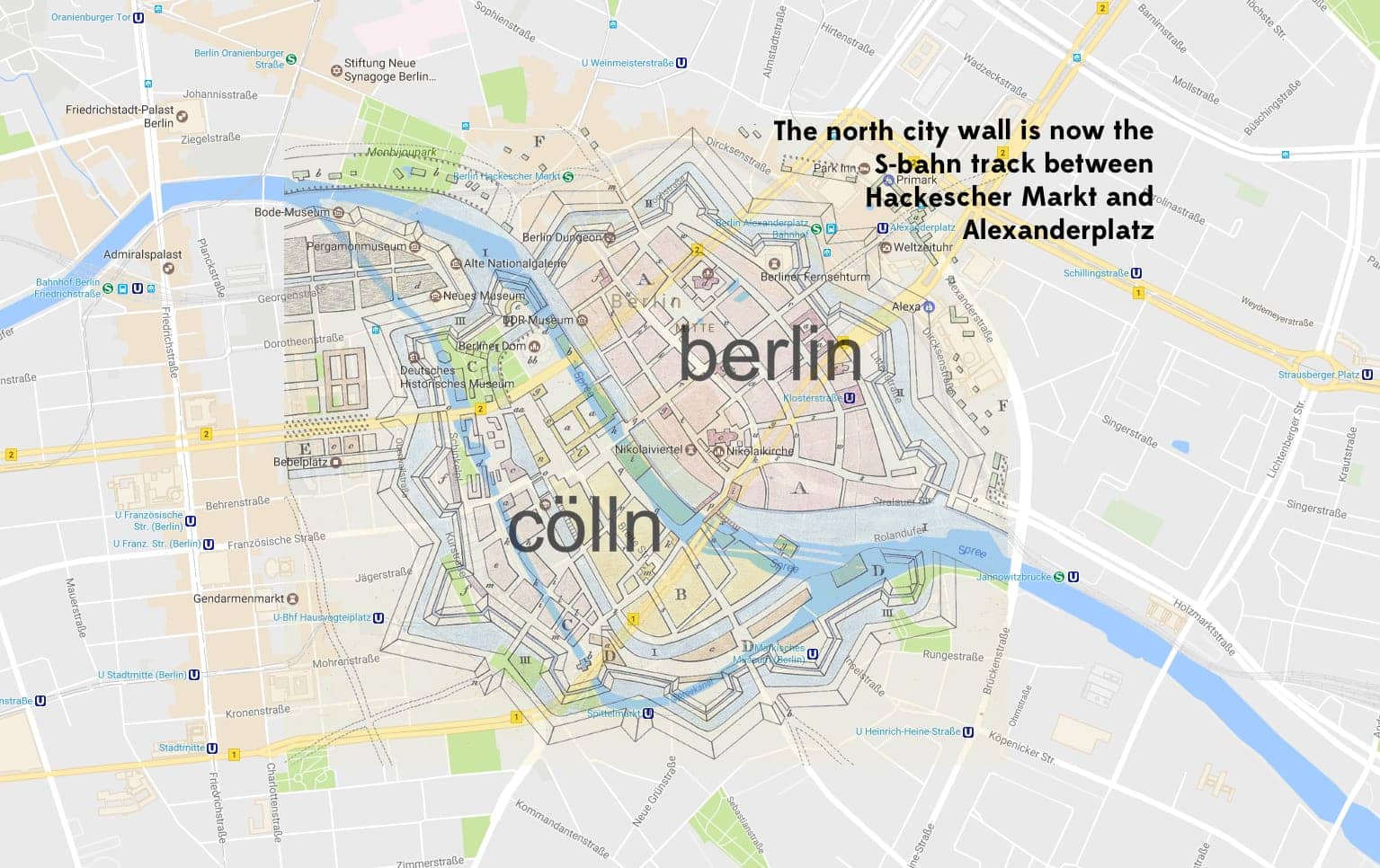 From the U-bahn station, follow Wallstraße to the east to the Kölnischer Park.

The Bärenzwinger was built in 1938 and contained up until 5 bears at once. The last city bear who lived here was Schnute, who died in 2015. 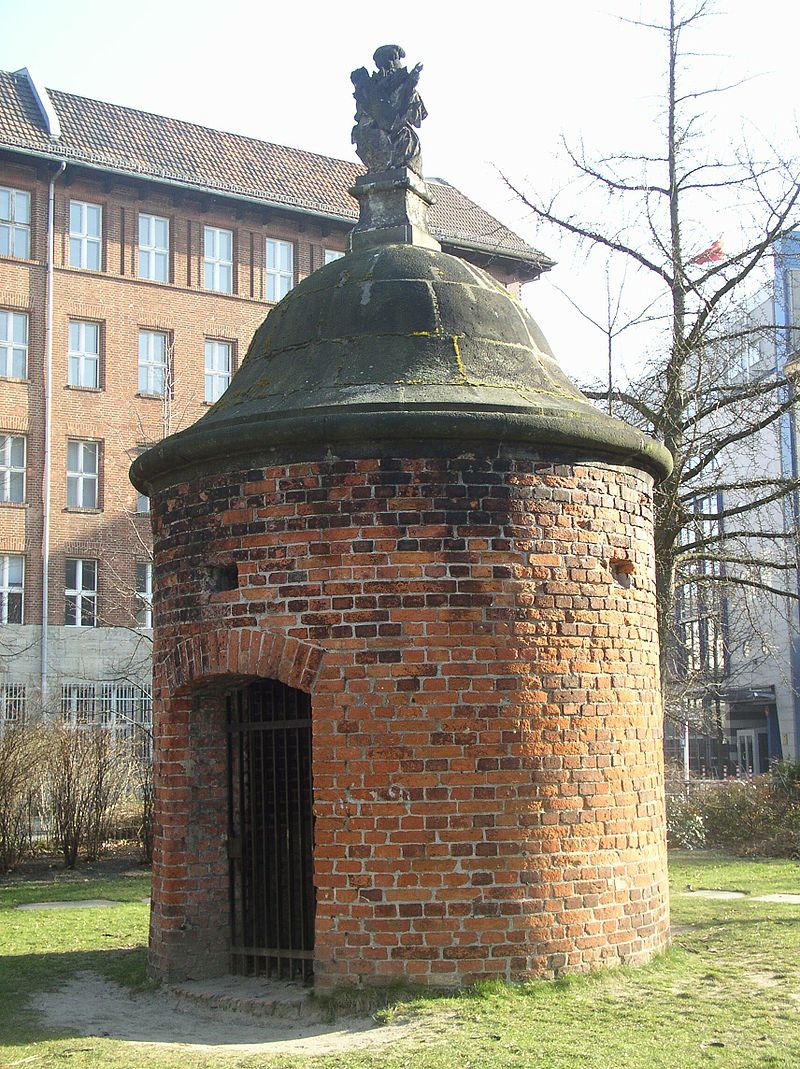 This small round tower was formerly part of a weir, a water regulating system for the wall defences. A weir is a barrier across a river designed to alter its flow characteristics. In Latin weir is Berum. This might be the origin of the name Bär and Berlin. This tower was on the road to Wusterhausen, asmall town north-west of Berlin and was moved to the park in 1893.

Leave the park on the eastern exit and walk north around the Märkisches Museum. The Museum was designed by Ludwig Hoffman, built in 1874 as a museum for the city of Berlin and completed in 1908. The museum hosts artefacts related to the culture and history of Berlin. If the gate is open, walk into the courtyard to see the architecture and statues.

Walk further north to find The Roland, a statue of a night with a drawn sword which is the symbol of town privileges, often placed at the market square or in front of the city hall. This is a copy of the Roland in Brandenburg a/d Havel. The name Roland is probably named after the mythological medievel night Roland.

From the Roland, walk north to the river and follow the water to the east to the second brigde. Cross the water and follow the water until you get to the Leipziger Straße. Go under the bridge and then up the stairs. When you come up you see a bridge with hundreds of locks attached to it. In Berlin you’ll see many bridges with locks attached to it. The water below you is Kupfergraben. Follow it to the next bridge.

You are standing on the oldest existing bridge in Berlin. It crosses the “Spree-arm” Kupfergraben and connects the streets Friedrichsgracht and Oberwasserstrasse. From this bridge you go back to the Leipziger Straße and go left to follow the street until you see the Petriplatz.

This is the location of the former Petrikirche, built in 1230 and destroyed during the air raid attacks in 1945. It was finally demolished in 1964. Follow the Leipziger Straße until you cross the Spree. You are now on the Mühlendammbrücke.

Welcome to the origin of Berlin. In the 12th century there were two Spree passages. One in Spandau and one in Köpenick. Somewhere between 1166 and 1208 a new passage was built here. The crossing was also a dam for water mills and formed the foundation of Cölln and Altberlin. The current bridge was built in 1968. After the bridge you go left into the Nikolaiviertel.

The crossing and dam attracted many people and the village Nikolaiviertel was built around 1200. It is one of the oldest neighbourhoods of Berlin. Cölln and Berlin were built around the Nikolaiviertel as a twin town. Cölln was first mentioned in 1237 and AltBerlin in 1244. The official birth year of Berlin is 1237. 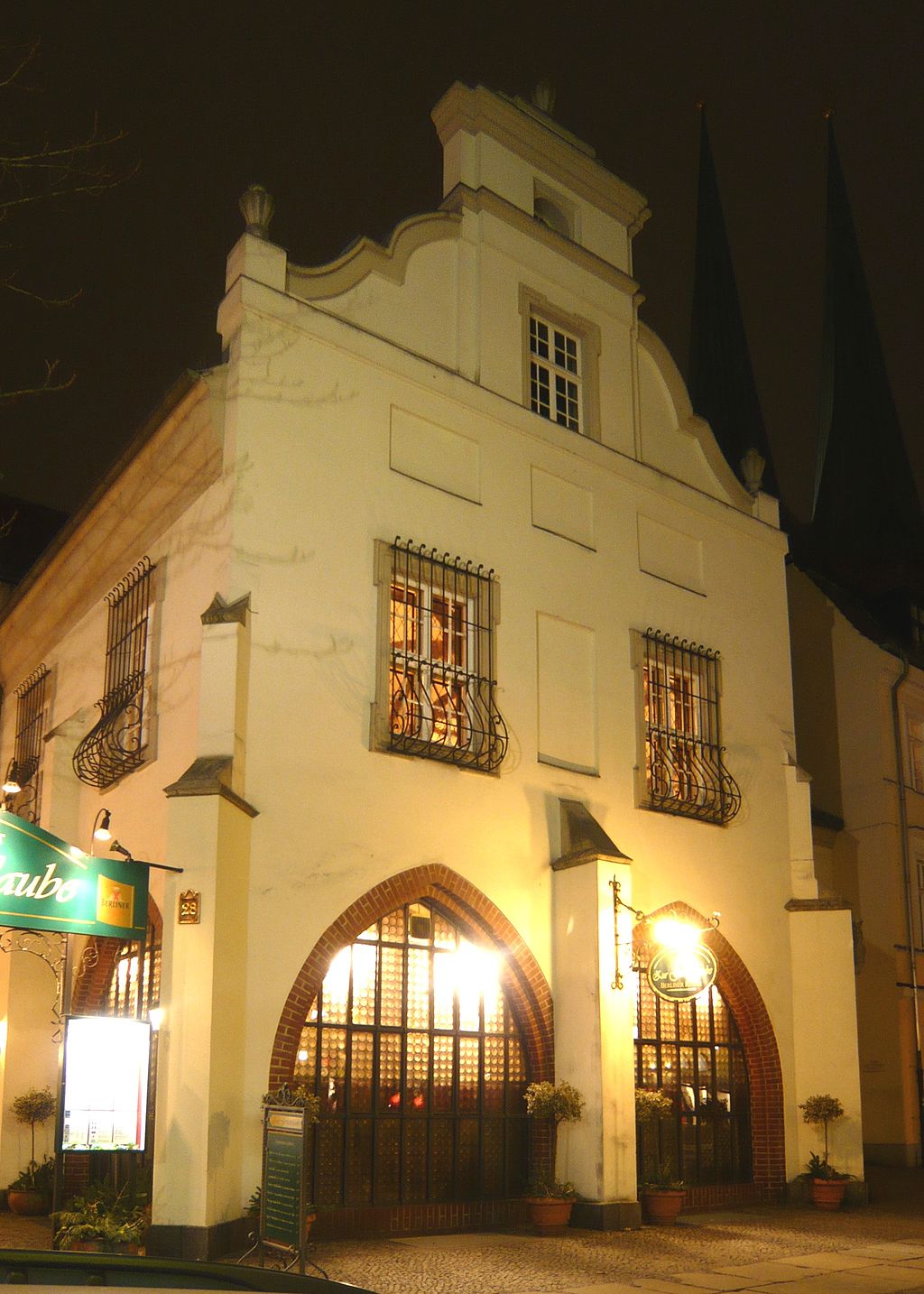 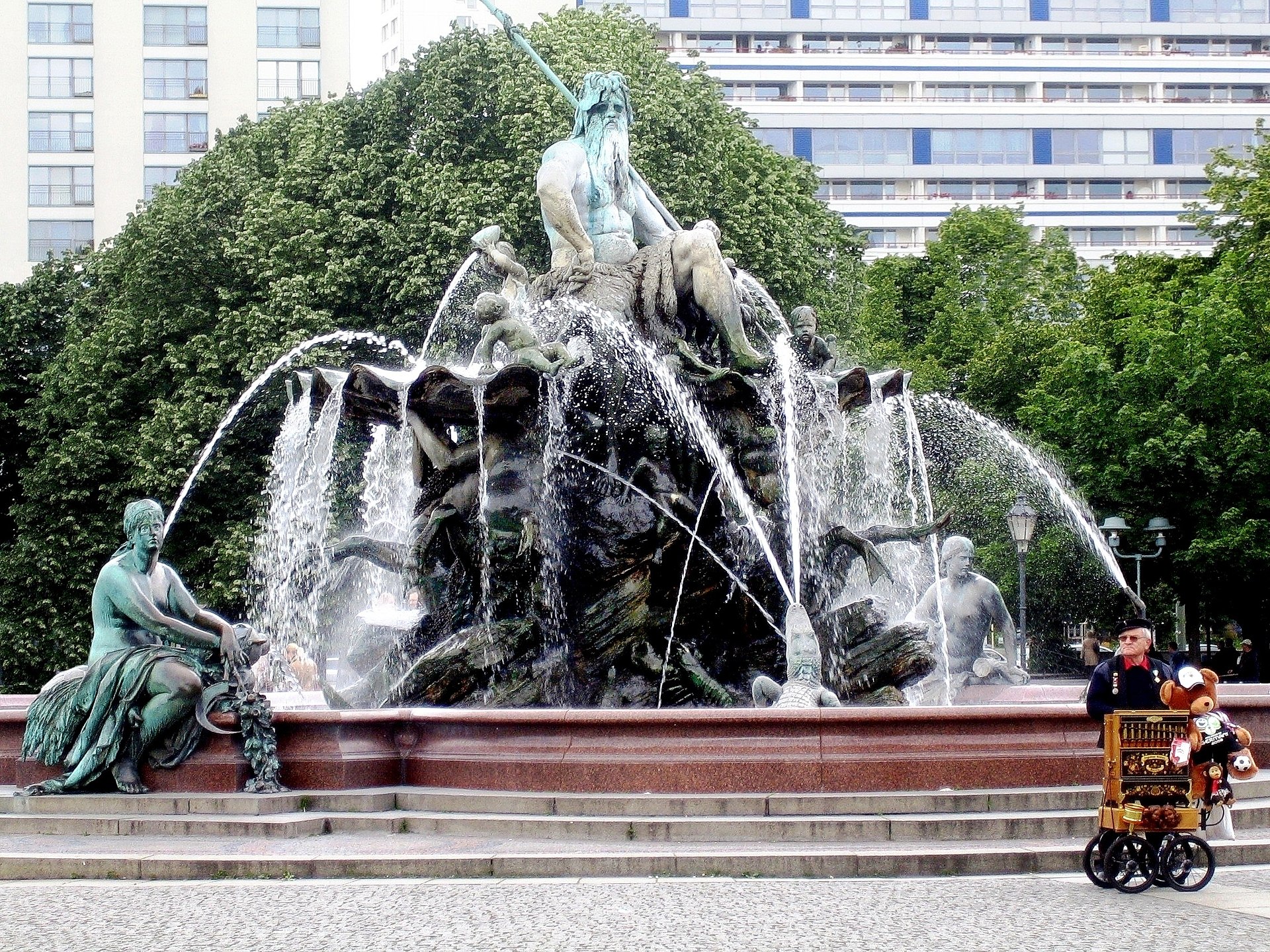 The Neptunbrunnen were built in 1891 and were originally located at the Schlossplatz. When the Berliner Stadtschloss was demolished in 1951, the fountain was stored and moved here in 1969, between the Marienkirche and the Rotes Rathaus. In the middle is Neptunus, the roman god of the sea. The four women around him represent the four main rivers of Prussia: Rhine, Elbe, Vistula (now in Poland) and the Oder

Next to the Neptunbrunnen you find the Marienkirche.

The church was first mentioned in 1292. The church was altered and rebuilt a few times and although it was damaged in the war, it was one of the few churches that still could be used. The church was restored together with the redesign of the Alexanderplatz and the construction of the Fernsehturm in 1969.

This concludes the tour through the oldest parts of Berlin, Altberlin and Cölln. I hope you enjoyed it!

Written by Loek van den Ouweland on January 25, 2017. Questions regarding this artice? You can send them to the address below.
By using this site, you acknowledge that you have read and understand our Cookie and Privacy Policy.