The P2000 used a teletext display chip and had a mini cassette player (using FM modulation) to store and load programs.

I set my first steps into programming in 1984. My father bought a Philips P2000T (T for Tape) with a Z80 processor running on 2,5 Mhz. The P2000 used a teletext display chip and had a mini cassette player (using FM modulation) to store and load programs. 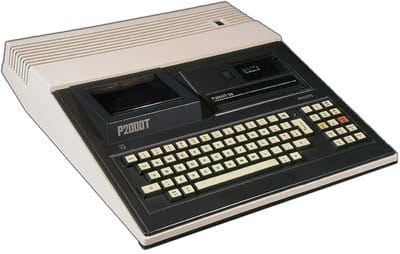 Philips used Microsoft BASIC on their earlier released Videopac G7000 game console and used this also in the P2000. This programming language is responsible for my future love for computers. This weekend I dug up the computer from my parents basement and took it home. I was very surprised that it still worked after all these years. For old time sakes, I typed in my favorite statements and enjoyed the output very much:

Soon after working on the P2000T, I bought a Commodore 64 where I learned assembly language and really started to learn the ins and outs of computers. Since 1984 I’ve worked with PC’s (starting with 8086/8088), embedded systems like industrial PC’s, Programmable Logic Devices, Programmable Logic Controllers and Raspberry PI, MacOS, Linux and many more technology I could get my hands on.

Technology is a huge part of my life and I program for a living and for fun. On of the biggest advantages of my work is that I can build, learn from it and teach other people what I’ve learned. I believe in giving back to the community through the creation of open source, free software, writing about my work and teaching other people how to program.

Written by Loek van den Ouweland on 2011-10-31.
Questions regarding this artice? You can send them to the address below.