Are you looking for a way to find GameObjects at runtime? Unity provides some methods to access GameObjects (or Transforms) but they are mostly based on types, names or tags and do not support recursive object trees. This article provides you with an extension method that allows you to use a lambda expression to recursively search the hierarchy.

Finding GameObjects and Transforms in Unity recursively with lambda expressions.

Let’s start by showing what I would expect from a modern environment that has .NET 4.6. compatibility. Suppose you created this hierarchy:

To get access to the GameObjects in the hierarchy tree, you want to be able to do something like:

What does Unity support?

In Unity, the following options are supported for finding the first instance of a GameObject or Transform:

The provided methods only provide finding by name or tag and if you change your hierarchy, searching by path a/b/c might break. What we want is one function that will search your object tree and allows you to find the first object that satisfies your search query. This can be achieved by creating an Extension Method that takes a parent Transform and predicate to recursively search your hierarchy.

The following FirstChildOrDefault method returns the first Transform in your object hierarchy that satisfies predicates like x => x.name == "deeply_nested_cube"

Update 2019-10-04. There is an improved version of this code. You can find it at Find GameObject recursively in the Unity hierarchy with LINQ queries

Here is the code. Just add it to your project:

Suppose you have a scene with a cube deeply nested in the hierarchy like this:

You can now use FirstChildOrDefault to get a reference to that cube. NestedTest is a MonoBehaviour attached to empty GameObject a in the hierarchy: 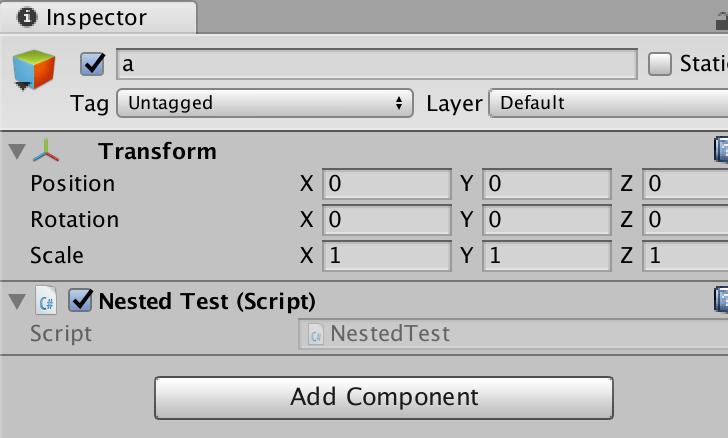 Look at the result in the console:

Now you have a tool to get access to all Transforms in the hierarchy by using lambda expressions.

A thing on performance

Some developers claim that finding elements in the hierarchy is slow. But speed is relative here. It all depends on these things:

In all cases, performance depends on the amount of items in the hierarchy and Whether you use recursion or not. Claiming a certain method (like Find or GetComponent<T>) is slow only makes sense when you know how many objects you are dealing with.

Find, FindWithTag and GetComponent<T> are no magic functions. They go through a list of objects and try to match items. So keep in mind:

I hope the FirstChildOrDefault extension method will save you a lot of work when you are trying to find objects in the hierarchy.

Written by Loek van den Ouweland on 2018-04-25.
Questions regarding this artice? You can send them to the address below.