Playing wave files in Windows 10 with sharpdx, C# and XAML

This allows you to add the Audio project to your solution... 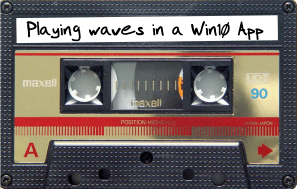 After trying the MediaElement in a Windows 10 Universal App, it seems it is still not the best choice for playing (fire-and-forget) wav files. It pops, clicks and cuts off samples. At least on my Windows 10 Technical Preview (Build 10061).

Native Direct X, shown in an earlier post, still works in a Windows 10 App, but I’d rather use SharpDX. The latest SharpDX (version 2.6.3) works in Windows 10.

You can download an updated project from Git. It is a Windows 10 (UAP) project and the Audio part is isolated in a separate UAP class library. This allows you to add the Audio project to your solution and use it like this:

The LoadWaves method loads all the files in Assets/Audio and assumes they are WAV-files.

I hope this helps you to quickly implement wave playing in your App!

Written by Loek van den Ouweland on April 25, 2015. Questions regarding this artice? You can send them to the address below.
By using this site, you acknowledge that you have read and understand our Cookie and Privacy Policy.