Yesterday I demonstrated how to create a Windows Phone 7 application with Expression Blend at the Atos Origin Microsoft Unit where I worked from 1999-2004. There were some great discussions about the relation between iPhone, Android, Windows Phone, HTML5 and Silverlight. After finishing the demo someone asked how to deploy the demo to a real phone.

I brought my friend and co-worker Fons Sonnemans to the meeting. Fons is one of the lucky guys in the Netherlands who has a real LG Windows Phone. (Courtesy Matthijs Hoekstra at Microsoft). We deployed the demo to the phone and people could actually use it on the phone. 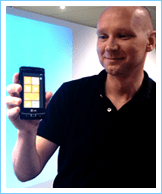 me and the phone

I would like to thank Rob Hodzelmans and the rest of my old colleagues for a great evening!

Written by Loek van den Ouweland on 2010-09-08.
Questions regarding this artice? You can send them to the address below.